​A project that I found to be challenging yet successful was the opacity drawing, it was my first time drawing something like that but I’m not dissatisfied with how it turned out. After learning the techniques to drawing something with opacity I’m more willing to do it in the future. I was stressed about starting this project, my composition sketch options weren’t interesting to me at first so they were sketchy and messy and when I did find an idea that I liked all the elements didn’t seem to fit on the page of my sketchbook. I recently learned about telling a story with my drawings and even though I’m not perfect at it now I’m still glad that I incorporated some type of storytelling aspect into the drawing. The idea of telling a story helped fuel my creativity so I took a picture of a gift wrapping bin with light from a minora casting on it, because it was kind of the winter season my theme fit accordingly. My teacher said that she liked the game board in the picture so I kept it. I saw it as one of the gifts that could have been wrapped in the material I was drawing. I was still intimidated to start drawing because I felt like I couldn’t get the blue of the ribbons exactly how I wanted it but the ribbons I colored on my final is my favorite part of the piece. Some ribbon curls are darker the farther back they go and that shows the illusion of depth really well. The reflection on the table of the objects is a nice detail that I like about the drawing.

5. ​I love this one opacity drawing done here the composition is really planned out, the colors are beautiful and show off the medium used really well. You can tell a lot of though went into it with the bag bottle and blueberry container all fitting into the theme of opacity really well. And looking at their blog I can see that there thumbnails are also really nice and neat. They set their subjects up at home and arranged them into the best composition and took the photo themselves. The only problem I have with the picture is that there’s this glare that shines over the final photo that doesn’t really do the piece justice

​
6. ​Prisma color was my favorite medium the first time I used it was in this class but after getting some experience with it I can say that it’s one of my favorites. I had some prisma colors that I purchased a while ago but this was the first time I used it and actually knew what I was doing. I learned how to layer them and why the neon prisma colors existed. Before I would have just thrown them away because it wasn’t a natural color but since then I’ve seen the value of saturated colors. 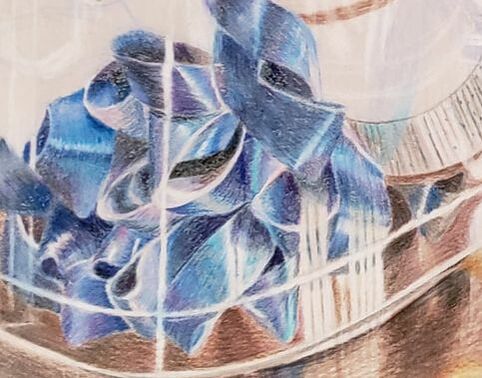 3. Though I’ve improved a lot after taking this class the things in my portfolio don’t fully show the extent of my skill. I’ve learned so much in the last couple of years so with each project I tried to show off what I learned but when my drawings couldn’t show off my level of expertise that I thought I was at I started to get frustrated. I ended up putting all of my energy into the beginning of a drawing and then not finish it. I was trying to build on my skills and take the new things I’ve learned and shove them all into my work. I felt like everything I made needed to be perfect. I would measure and sketch and erase until what was on the page could fully represent what I saw but I didn’t have the time to do all of that. So I’ve recently been simplifying the last half of my projects just to get them done. I’ve learned that I’ll get many chances to show off my skills and grow as an artist so it’s ok to simplify just to meet deadline. I’ll make detailed works of art on my own time and with practice I’ll be able to create more detailed pictures in less time. Even though I don’t feel like my portfolio is an accurate representation of my growth I’ve still improved a lot and I’ve learned skills that I will be able to incorporate into my future work.
​(Pastel drawing is an example of a simplified drawing.) 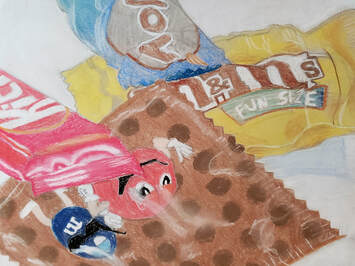 4.One mini lesson that I learned a lot from was the prisma color strawberry I did. The project was to pick out a preprinted picture of a fruit or vegetable and draw it with prisma color. This was going to help us learn the medium. But as I was drawing it I didn’t measure so the strawberry drawing ended up enlarged on the paper so it was going to take more time to complete the assignment. One of the difficulty’s I faced while doing this project was when I saw trying to ‘’draw what I see’’ but I couldn’t see much because the picture was so blurry so to save time I simplified what I saw. Another problem for me was the fact I was drawing from a flat picture so the drawing was turning out flat and because I could see that it bothered me. This was around the time where I was doing college submissions for art schools and I had seen the competition prior to going back to school so I stressed myself out over every little project. But in the end I simplified it finished it and I was happy with the final product. Another mini lesson that really helped was the facial features lesson. Where we drew our own lips nose and eyes, this project took a while but I didn’t stress myself out about it and I focused more on drawing simplified versions so I could complete the assignment. I focused more on the form instead of the small details and it helped my final project because I knew what my features looked like a little better before going into the project.
​
Powered by